What it Takes to Launch a Mobile Learning Program in Schools

The report breaks down usage and policies in different areas, including North America, and part of the research focuses on “Essential Conditions for Mobile Learning.” In this section of the report, researchers present five key conditions that must exist for a mobile learning initiative to succeed: visionary leadership and commitment, robust technology capacity, professional development, scalability, and policies that promote and support the initiative.

via Tumblr What it Takes to Launch a Mobile Learning Program in Schools
Posted by Stewart Marshall at 31.8.12 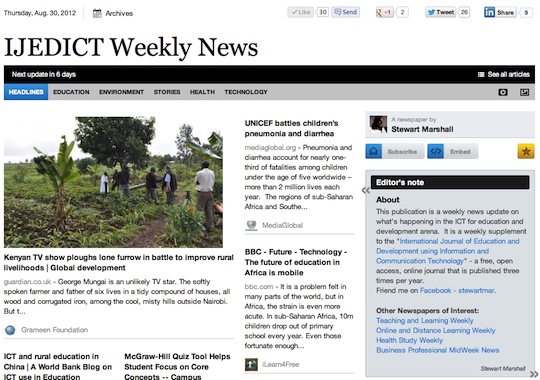 This publication is a weekly news update on what's happening in the ICT for education and development arena.

Geriatric courses provide students with knowledge of health and disease in later life - this page provides details of programs, schools, prospects and more …

via Tumblr Geriatric Courses
Posted by Stewart Marshall at 25.8.12

Why You Should Talk to Kids About Cyberbullying [INFOGRAPHIC]

There is a lot to do before your kid’s school year commences. Hopefully, having a talk about cyberbullying will be on your to-do list.

According to a recent study by internet security company McAfee, kids are witnessing and sometimes engaging in cyber bullying. Almost one in four of teens claimed to be a target of cyberbullying and two-thirds of all teens have witnessed cruel behavior online, notes the Teen Internet Behavior study.

via Tumblr Why You Should Talk to Kids About Cyberbullying [INFOGRAPHIC]
Posted by Stewart Marshall at 24.8.12

Email ThisBlogThis!Share to TwitterShare to FacebookShare to Pinterest
Labels: education 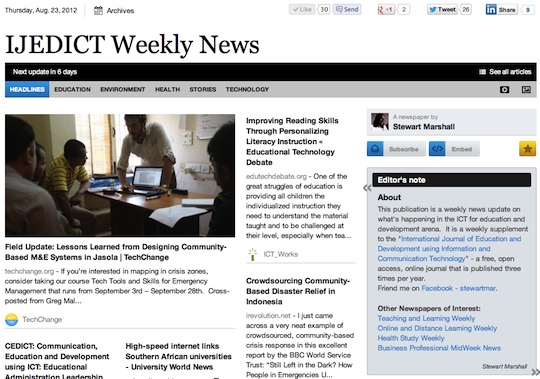 This publication is a weekly news update on what's happening in the ICT for education and development arena.

This page provides information on what is studied in educational administration leadership masters degrees and where you can study them online.

The non-intrusive bracelet has a tiny red LED light to also remind the medical practitioner to wash their hands between patients.

via Tumblr Digital Bracelet Detects If Medical Staff Need to Wash Their Hands
Posted by Stewart Marshall at 19.8.12

Social Media: 20 Types of Content and Format that Engage

See on Scoop.it - Transformations in Business

The cry of “Content is King” has been a rallying call for bloggers and on-line publishers for years.

Creating and marketing your content is now as easy as typing text and uploading images and videos and then hitting the publishing button.

This has been facilitated by the advent of social networks and blogging software that facilitate fast efficient multi-media publishing.

via Tumblr Social Media: 20 Types of Content and Format that Engage
Posted by Stewart Marshall at 18.8.12

Education in adult education programs can lead to interesting careers in education. This page provides information on what is studied and where you can study them.

via Tumblr Education in Adult Education
Posted by Stewart Marshall at 16.8.12

Email ThisBlogThis!Share to TwitterShare to FacebookShare to Pinterest
Labels: education

via Tumblr Masters in School Counseling
Posted by Stewart Marshall at 15.8.12

Case Study: How Education Cost has Grown up Quickly in Recent Times

via Tumblr Case Study: How Education Cost has Grown up Quickly in Recent Times
Posted by Stewart Marshall at 13.8.12

The hackers encrypted the records and demanded the practice pay money for a password to access the files. The practice declined to pay, shut down the server and notified authorities. It was unclear from the report whether the practice was eventually able to access its EHR records, or if so, how.

Find out about patient care technician certification, learn about the courses, where they can be taken, the career prospects, and more …

Connected Learning is ” when you are pursuing knowledge and expertise around something you care deeply about, and you’re supported by friends and institutions who share and recognize this common passion or purpose”.

“Teaching our kids to be creative is just as important as teaching them critical thinking skills.Creativity open up students mind to new learning horizons and makes them capable of tackling new and novel situations way better than any explicit instruction would do.”

See on Scoop.it - Transformations in Business

Agricultural workers in Ethiopia such as farmers and researchers came together in Addis Ababa to discuss a farmers market information system (FMIS).

The pupils of a special needs primary school in Kitwe, Zambia will receive tablets and smart boards to help them channel their creativity and stimulate them to work on activities together.

via Tumblr Smartboards and Tablets Help Students with Special Needs in Zambia — IICD
Posted by Stewart Marshall at 3.8.12

Apple iPad grants can be found to help Classroom teachers, parents of autistic children, preschools, non- profit groups and other institutions pay for iPads to further educational learning of individuals and group.