Free and Open Source Software (FOSS) - software that any developer can modify and improve - is an obvious way to go for developing countries - and the idea and its use are certainly gaining ground in Africa. One of the interviewees in this video captures the spirit nicely. As a child he would take his new toys apart to see how they worked - he never could accept the principle that things were closed to prevent understanding and improvement.

But there are obstacles - and they are within the very institutions that stand to gain so much. As another interviewee so rightly says - there is resistance within the administration of universities (even within the IT divisions) to adopt open source software. Watch the video - it's good.

The two projects profiled here, AVOIR and POLLES, are providing both the software to encourage eLearning and university administration in sub-Saharan and North Africa respectively, along with providing a platform for post secondary institutions to get applied training in software development. Connectivity Africa has been supporting these initiatives since 2004.

How technology influences and is influenced - this video presents amazing research on the development and evolution from the industrial age to the information age and globalization. The figures will, of course, be out of date by the time you view this video.

This movie was intended to answer some of the questions left by the original shift happens production of "Did you know?"

Movie developed and researched by Lyle Potgieter, Mark Middleton, Fabrice Ho Fi and Renee Thorn. Enquire at http://www.PeopleStreme.com for a Facts Sheet.
Posted by Stewart Marshall at 9.11.09 No comments:

Shift happens - Did you know?

Shift Happens: Education 3.0 - a newly revised edition for 2009 of the video originally created by Karl Fisch, modified by XPLANE and Campus Management. It answers the question, "What are we doing about the shift?" and covers innovations by Ashford University, Bridgepoint Education, Huntington Junior College, Jones International University, Mercer University, University of the Rockies, and The University System of Georgia.

This video gives an interesting perspective on how fast developments are taking place and emphasises how important it is for us to ensure that no country or community is further disadvantaged by being left behind.
Posted by Stewart Marshall at 6.11.09 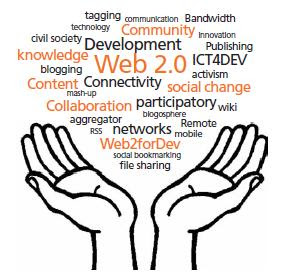 So what is Web 2.0 and what are these changes?

The book/report "Change at hand: Web 2.0 for development" covers these topics. It is special issue of the series: Participatory Learning and Action that is guest-edited by Holly Ashley, Jon Corbett, Ben Garside and Giacomo Rambaldi, published in June 2009 by IIED and CTA.

It shares learning and reflections from practice and considers the ways forward for using Web 2.0 for development. A multimedia CD Rom with articles in English and French (and some in Spanish) is forthcoming later in 2009.

Each introductory guide provides a brief description of the Web 2.0 tool and how it can be used for development purposes, along with links to further information and where applications can be downloaded online (more information also in e-participation):

This special issue is co-published with the Technical Centre for Agricultural and Rural Cooperation (CTA) and is licensed under the Creative Commons Attribution-Non-Commercial-Share Alike 3.0 Unported License.